PROJECT CO-FINANCED BY THE EUROPEAN UNION

The project aims to create a prototype of a software suite to support the film production and media production chain, for the management and automatic processing of film assets at all stages of processing.

The proposed solution provides for the prototype a role of “resource orchestrator. The system will include a relational database in which all the information related to each essence will be stored (names, metadata, etc.), while the essences themselves will be separately stored on one or more video servers. The application will be able to display the assets of a project as a tree view, based on appropriate hierarchies.

The design of the Graphic interface (GUI) will respond to ergonomic criteria and will decline itself in views that will differ on the base of the role played by the user.

The proposed architecture foresees for the prototype a web-based GUI, articulated in a certain number of back-end servers, a JavaScript-based front-end and a suitable framework.

The project is carried out in close synergy and effective collaboration by Digital Media Technologies with the University, being able to count on the scientific skills of the Mathematics Department of La Sapienza University of Rome, of BlueCinemaTV and of 64BIZ for the completion of all the phases of Industrial Research. and Experimental Development that compose the Activity Program.

The project aims to have an impact on the film production chain and, more generally, on the media, responding to a need for rationalization and, above all, standardization of processing.

Right now, the film and broadcast industry of the most industrialized countries has almost completed its turn towards digital and, in recent years,  new professional figures have emerged on the set and in post-production, first of all the DIT (Digital Intermediate Technician).

As in every technological transition, when the “heroic” phase is exhausted, a rationalization of the production processes follows.

It is believed that the proposed prototype can induce, along with other technologies operating in the same field, a standardization of procedures.

As mentioned, the project aims at the productive diversification of the Digital Creative Industries by creating a new economic front and a new reference market for a family of tools that combine the automatic management of workflows with predictive analysis tools and helpful to the technical and economic planning of productions.

The realization of a prototype ( software suite for management and automatic processing of cinematographic and broadcast assets) is expected at the end of this project.

The prototype is expected to have a TR7 level ( https://en.wikipedia.org/wiki/Technology_readiness_level ) and be ready for thePreindustrialization.

The CIAK project – SOFTWARE SUITE FOR MANAGEMENT AND AUTOMATIC PROCESSING OF CINEMATOGRAPHIC ASSETS has been admitted to facilitations within the scope of the POR FESR Lazio 2014-2020, Public Notice “Creativity 2020” – Integrated Projects, Application Prot. n. A0128-2017-17206.

The financial support allowed is equal to:

As part of the development of the CIAK project, a meeting with the Blue Cinema TV production company took place on September 25, 2019. The meeting was held at the DMTech offices.

The meeting is part of a series of sessions between the development group and the project partners, meetings aimed not only at validating the prototype at its current state of development, but also at enriching the specifications with ideas regarding the future development of the prototype itself.

In fact, there is nothing better than the consolidated experience of Blue Cinema TV in the field of film production to help the research and development team focus on the typical problems of a film set and take care of them during the development of the application.

During the meeting, it was made a review of development activities in general and specifically about the activities entrusted to the supplier Blue Cinema TV: in the first part of the meeting  and the procedures implemented or in the process of being implemented were presented, paying special attention to  the management of the daily shooting during filming.

The first part of the meeting focused mainly on the processes of ingestion and creation of safety copies of the materials coming from the set, thus also addressing specific topics such as the management and support of devices and platforms for backup and archiving of materials, for the creation of proxy files that allow a quick visualization of the materials themselves and the problems that relate to the security in the data transfer, all fundamental aspects for the future development of a highly functional product in this field.

The meeting highlighted that  the development of CIAK is proceeding in the right direction and, at the same time, has provided valid suggestions for some improvements to be made soon and for functionality to be implemented at a later time. This thing was mainly discussed in the second part of the meeting, aimed at better defining a medium and long term vision that can be not only sustainable but hopefully “winning”. The conclusions gathered in this second part of the meeting served to better define the characteristics of parts of the project that will be strengthened in the future.

The CIAK project research and development team met with the team of the company Media Fenix S.r.l to visit their offices and become familiar with the technologies used by understanding the problems and needs that operators encounter in the path that goes from the moment where the material arrives until delivery to the customer.

During the meeting, the subject of metadating an asset is dealt with which, when it arrives to be analyzed, is generally composed of several elements such as video components, audio components (languages, music, and effects), subtitles (localized) and descriptive texts of the material itself. All these elements create a package that has various identities and must be subject to quality control based on them. Metadata also serves to recognize the good following archiving.

The DMTECH research and development group illustrated the prototype it is building by focusing on the definition of a data hierarchy (master clip> essence> instance> media file), on the defined entities, on the naming convention of the custom metadata that are defined in order to have a complete traceability of the operations performed on the material, from the moment it is ingested to storage.

Several problems emerged from the meeting and the need to have a tool that facilitates the management of articulated flows through the definition and management of production workflows.

On Tuesday, May 28th, the research and development group of the CIAK project met with the 64BIZ company, a cooperative production company.

The actions that the operators perform during the treatment of a video were illustrated to the group.

In detail, the metadata acquired by the tape and the metadata needed to save and search for the document itself has been discussed.

The CIAK team also had the opportunity to attend a color correction simulation at different resolutions (HD and HDR), during which the specifications and video and audio parameters necessary for cinema and television were illustrated.

During the meeting, the difficulties encountered in the production of a video and how it is possible to overcome them with the use of innovative technologies of which 64BIZ is equipped were exposed.

64BIZ is a company based in Rome with important experience in the field of film post-production. Specializing in video titling, localization, and versioning (national and international), motion graphics, DVD / Blu Ray authoring, and DCP mastering.

The Ciak project is carried out in close synergy and effective collaboration with 64BIZ for the completion of all the phases of Industrial Research and Experimental Development that make up the Activity Program. 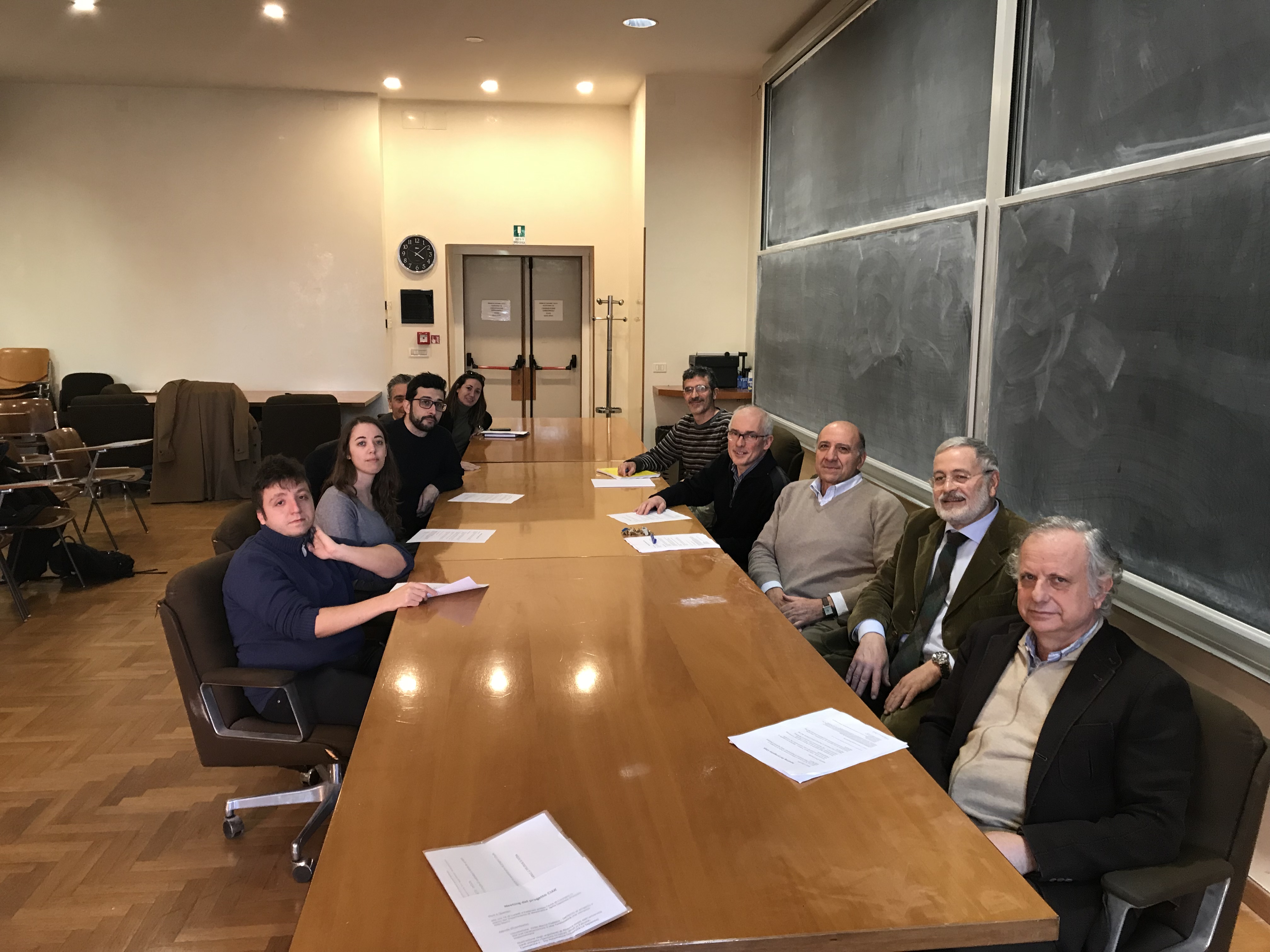 Panel: Project development plan verification and collection of suggestions from experts in the sector

During the months of September and October 2018, in the framework of the activities for defining the specifications envisaged by the WP1, DMTECH organized meetings with a panel of experts to better define all the possible evolutions of the project and to validate the project’s development plan.

The panel has seen participating three different categories of contributors:

The organization of these meetings allowed a critical review of the project objectives and issued recommendations to the development group. 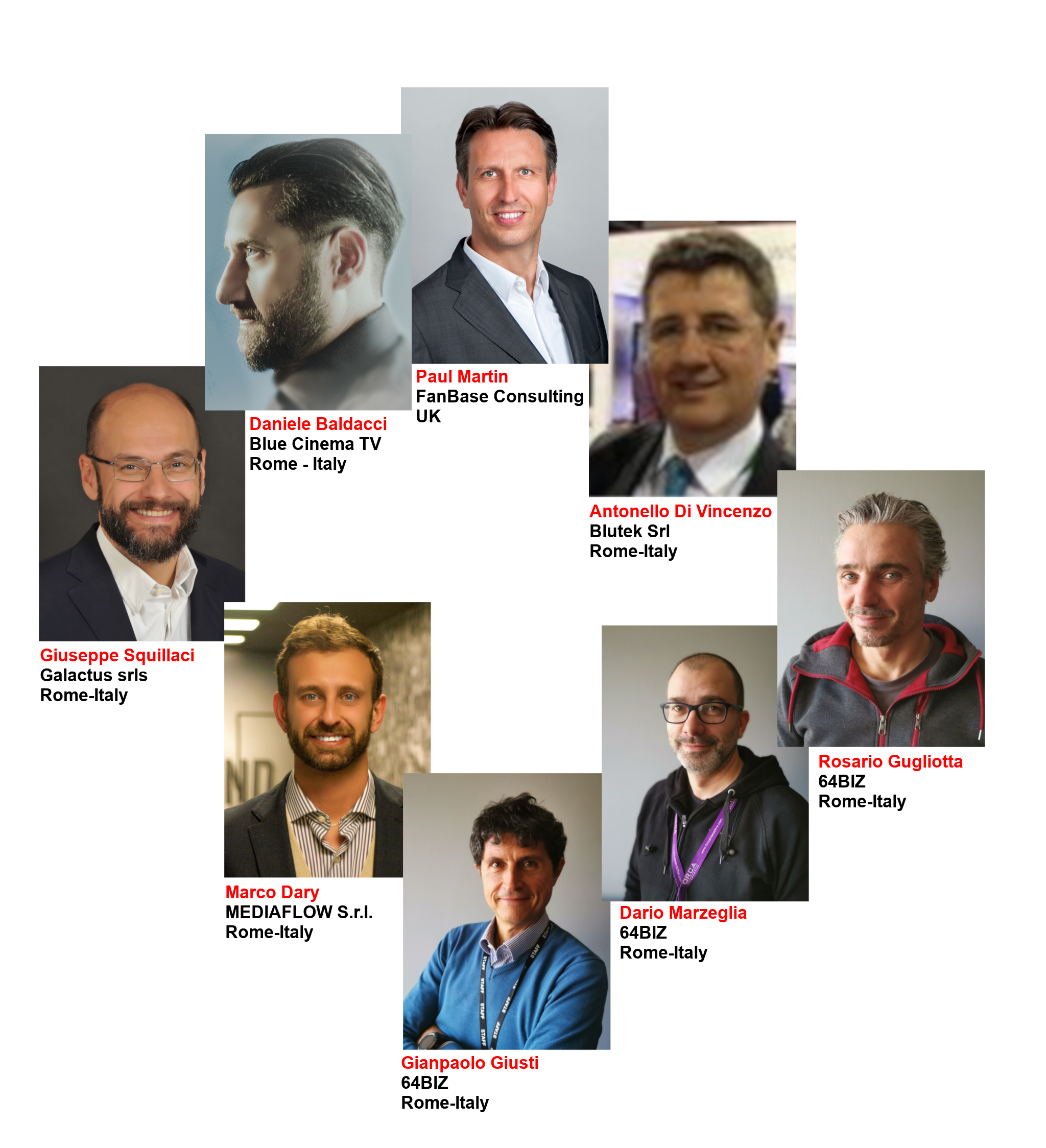 Panel: Project development plan verification and collection of suggestions from experts in the sector

During the months of September and October 2018, in the framework of the activities for defining the specifications envisaged by the WP1, DMTECH organized meetings with a panel of experts to better define all the possible evolutions of the project and to validate the project’s development plan.

The panel has seen participating three different categories of contributors:

The organization of these meetings allowed a critical review of the project objectives and issued recommendations to the development group.

CIAK – SOFTWARE SUITE FOR MANAGEMENT AND

CIAK – SOFTWARE SUITE FOR MANAGEMENT AND

The proposal was presented in the “Creativity 2020” call published by the Regione Lazio in the context of POR FESR Lazio 2014-2020, which finances projects for development, production and cross-media distribution, digital post-production, digital and live entertainment, development and use of digital technologies for restoration and protection of audiovisual cultural heritage, as well as for the development of applications in digital services for medicine, health and personal well-being.

The project will be developed in collaboration with the Department of Mathematics of the University of Rome – LA SAPIENZA.